Choosing the right technology for your backend is quite a laborious task. There’s plenty of technologies with tons of frameworks, each specializing in certain tasks, and you’d be unable to wrap your head around all their pros and cons. The backend is basically where a lot of the magic happens -unless you’re taking the processing to the client side. To be able to pull the rabbit out of the hat, you’d have to get familiar with the hat first. Today, we’ll be talking about two giants in the backend world and how to make a choice wrt Node JS vs PHP performance. 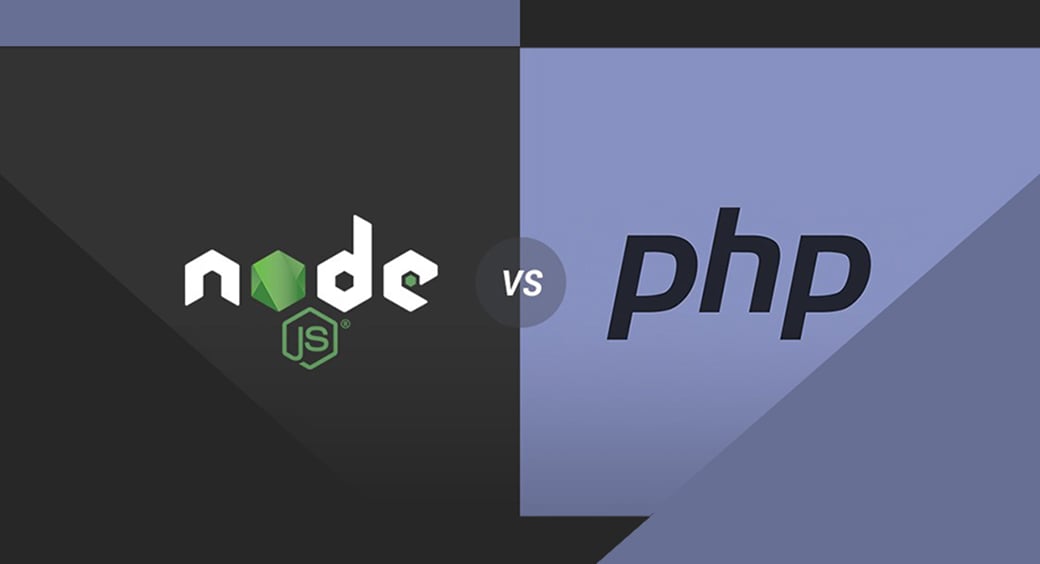 It’s true that Node.js is a backend platform to run Javascript on the server and PHP is a programming language, but at the end of the day, they are two backend technologies. 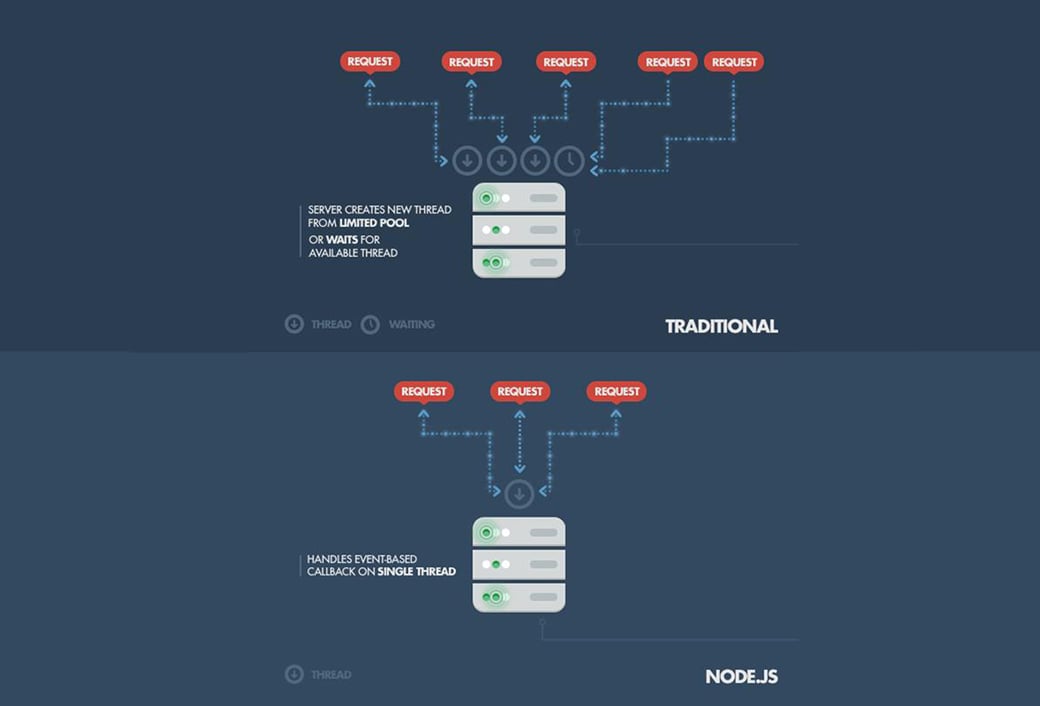 This is perhaps the most fundamental difference between the two. Node.js is single threaded non-blocking event loop whereas PHP uses a multithreaded approach. To understand how these two approaches are different, imagine you’re going to a bank to withdraw some money from your account.

When there’s a lot of heavy lifting to do in an application, a lot of concurrent connections to attend to and you need a quick turnaround time, Node.js is simply your guy. And it also makes for a more scalable approach, usually a multithreaded approach whether PHP or ROR would allocate somewhere close to 2mb of ram to each user. So to avoid any potential loss of conversion, you’d have to allocate a greater number of resources to your project. It’s like you use a 30 floors building just because you get a lot of traffic at lunchtime.

It was reported that Linkedin’s mobile infrastructure was cut down from thirty servers to just three when they migrated from ROR to Node.js, and they had enough headroom to handle ten times the requests they had. Event handling makes Node a better contender in Node JS vs PHP performance battle.

PHP Zend uses an interpreted compilation strategy while node uses a Just-In-Time compilation which leads to more optimized code compilation but often at the cost of a slightly longer initial loading. There are open source projects for PHP JIT compilation like HHVM and HACK which offer a somewhat close performance to Node while comparing PHP 7 vs Node JS. 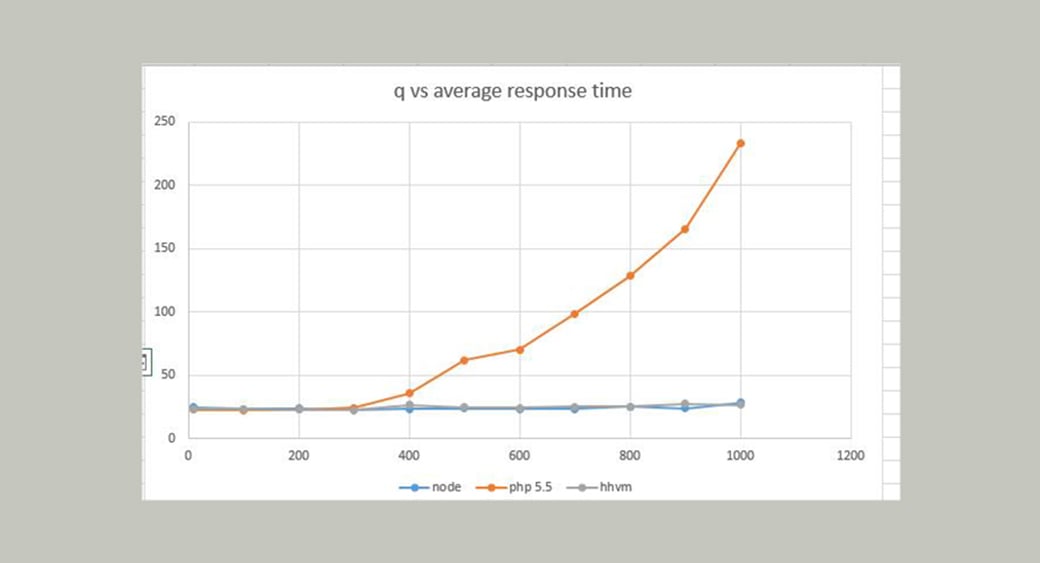 An HTTP+CPU task test sheds some light in terms of Node JS vs PHP performance advantages. The test uses a bubble sort benchmark for the CPU test.

Clearly, when PHP Zend reached its maximum number of resources -around 250 requests- the average time started to fire up. The HHVM was almost as fast as Node for a 1000 elements, but at 10,000 elements node was twice as fast.

One Language Across the Stack

Usually, you’d have Javascript at the front end and something else at the backend. Which required two different mindsets and potentially two different developers. With node, however, it’s just one language across the entire stack, which harmonizes the entire development process, reduces the number of talents needed in a single team, and brings everybody on the same page to attain node js performance.

The core reason why Javascript is becoming a beast in the developing world is the speed that the V8 engine provides. Google is already pushing the very limits of the speed of the V8 engine which is empowering Javascript quite a lot. V8 is an open source project, and it has long dusted its predecessors in terms of speed and consistency. JavaScript being on Node side in Node JS vs PHP performance evaluation gets Node better evaluation.

Could you imagine that PHP which precedes Node with 15 years only has around 150,000 packages, while Node is well beyond 450,000 packages?  The node package manager has brought the ruby gem’s concept.

Javascript has jumped to number one most popular programming language spot, if anything, it’s a bonus advantage for Node. The community is fastly growing and such a powerful community adds to the technical power of Node. Node currently has almost thrice the number of PHP contributors on GitHub making open source node js performance commendable.

While it’s true that node is the most trending technology nowadays, let’s not forget that PHP is the most popular backend technology of the modern web. According to similartech.com, PHP is currently powering 42,600,000 websites which places it leaps ahead in Node JS vs PHP performance race, and by a huge margin too.

Over the years, PHP has become the modern standard of the web, the conclusion to that is that it’s supported by most of the server hosting providers while comparing PHP 7 vs node js neck to neck. You’d have tons of options when it comes to deploying your server because regardless of the type, it’s most probably compatible with PHP. Not to mention that one of the real powers of PHP is how easy it is to connect to a relational database.

PHP also possesses a handful number of rich and powerful frameworks that make the development process easier and that is quite supported as well thanks to PHP’s popularity.

There are core differences wrt Node JS vs PHP performance, even fundamental ones. The rising popularity of node doesn’t mean that PHP has become something of the past. PHP is here to stay, but experts believe that node might be the future of the backend world. Node does indeed come with its own set of challenges, and might even be harder in terms of development, after all, it didn’t get PHP’s time to mature.

There are many variables included when you compare two technologies like your prior experience, time to market, deployment method among other things. So the core criterion upon which you should base your decision should primarily be your needs. Check out the best Nodejs tutorials and PHP tutorials recommended by the programming community to learn the language of your choice on the internet and make sure you’re in line for these essential NodeJS skills in the web development domain. All the best!

Tags: developer's guide web development web development news
Author: Saurabh Hooda
Saurabh has worked globally for telecom and finance giants in various capacities. After working for a decade in Infosys and Sapient, he started his first startup, Lenro, to solve a hyperlocal book-sharing problem. He is interested in the product, marketing, and analytics. His latest venture Hackr.io recommends the best Unity tutorial and online programming courses for every programming language. All the tutorials are submitted and voted by the programming community.
Thank you for subscribing to MotoCMS blog!
This email is already in use.
Something went wrong. We are fixing this. Try a bit later. 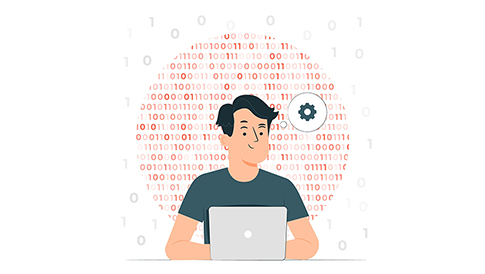 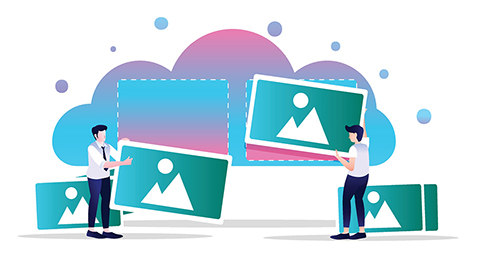 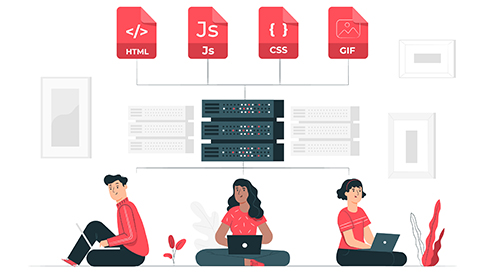 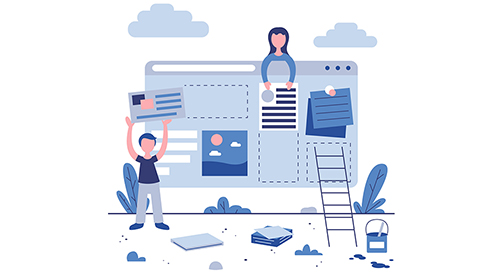