11 Aspects That Will Define the Future of Ecommerce in Numbers

Clearly, whatever your business is, you need a strategy to attract and retain customers online. But the rapidly evolving online ecosystem means that companies, big and small, must be aware of the future of ecommerce in the next five years, and strategize accordingly. 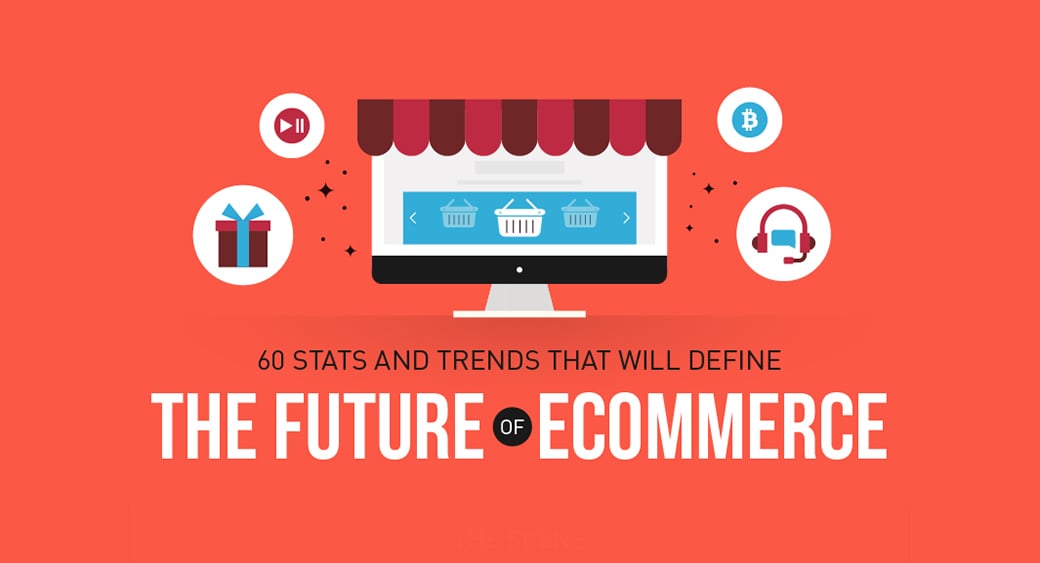 Some questions immediately come to mind. What role will automation and artificial intelligence play in the future of ecommerce? Which online experiences is the consumer of today and tomorrow looking for? Are drones the future of ecommerce delivery? What’s the difference between multichannel and omnichannel strategies — and which one should you adopt for your business? 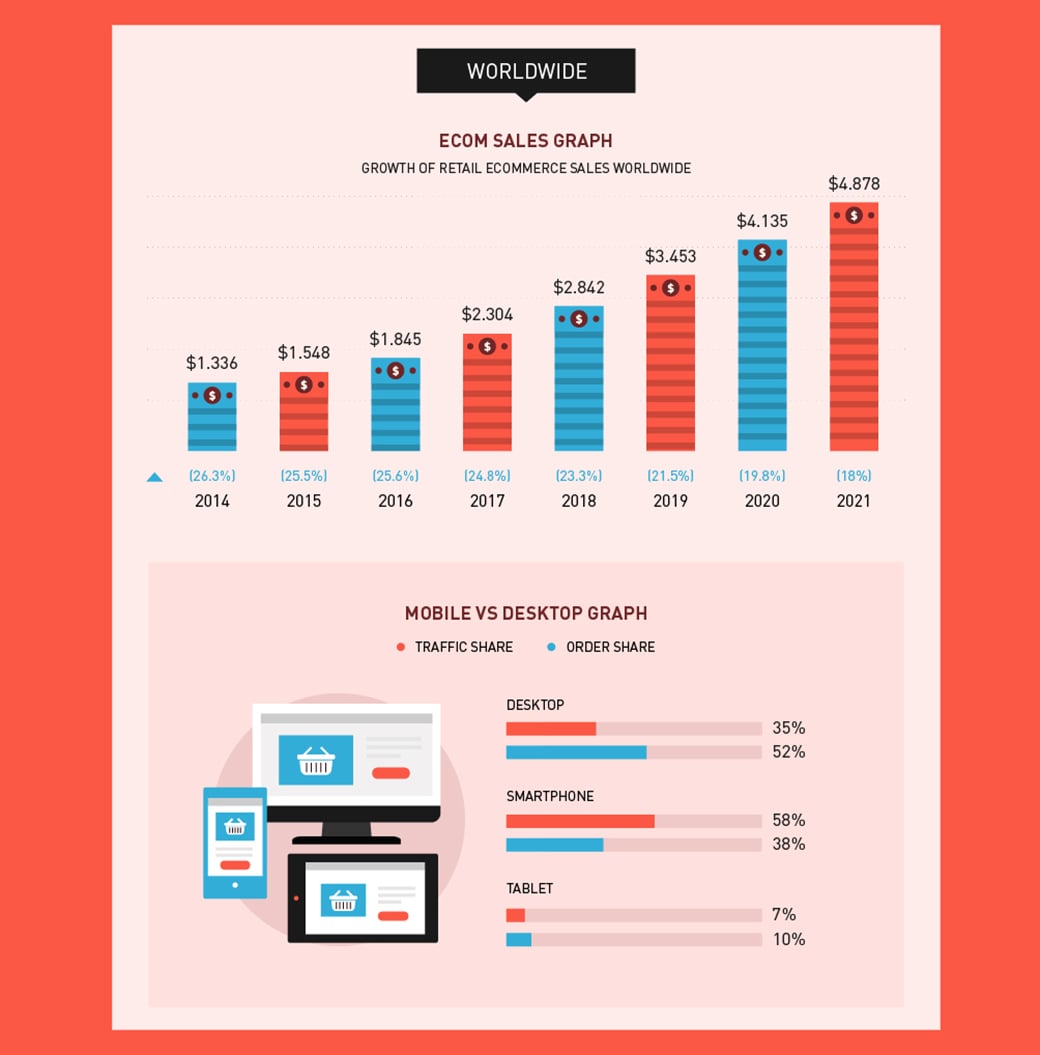 On August 11, 1994, Phil Brandenberger, a resident of Philadelphia, logged on to his computer and bought the compact audio disk Ten Summoner’s Tales by the legendary musician Sting for $12.48 (shipping was extra). That’s how modern ecommerce was born. This is widely regarded as the first time that an internet purchase was made using encryption technology. 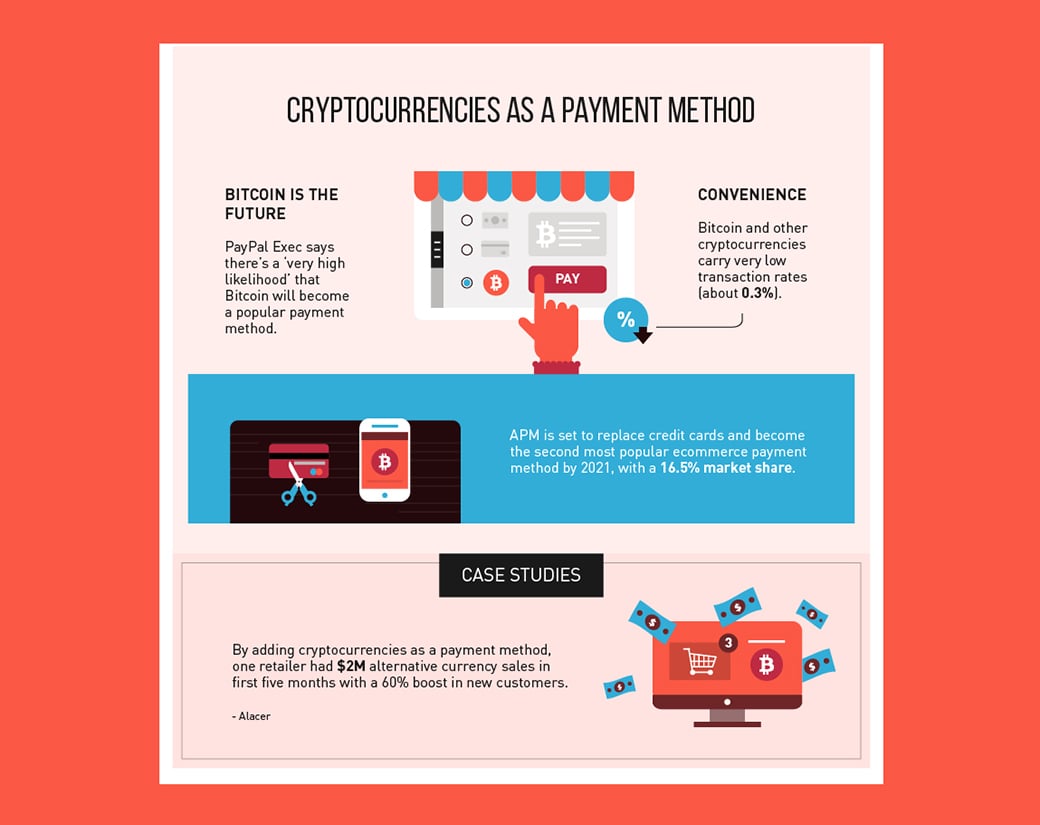 That historic transaction also provides a clue to what constitutes ecommerce. In basic terms, it is a commercial transaction conducted online. That is, whenever you use the internet to sell or buy something, you are taking part in ecommerce.

We’ve come a long way from August 1994. Ecommerce transactions have risen in the last two decades. By 2014, worldwide ecommerce sales had reached $1.3 trillion. They are set to reach $2.8 trillion by the end of 2018 and — wrap your heads around this — exceed 4 trillion after 2020!

According to our friends from Subscriptionly, answers to these questions are easily obtainable. By taking a closer look at some of the key factors that will define the future of ecommerce, we got to the following conclusion – ecommerce in the following years will heavily depend on 10 aspects:

Consumers Are Looking For a More Personalized Experience

According to an Accenture Research report, 43% of consumers prefer online companies who enable personalized online shopping experience. More than 40% of consumers switched to another company because the personalization was not up to mark. 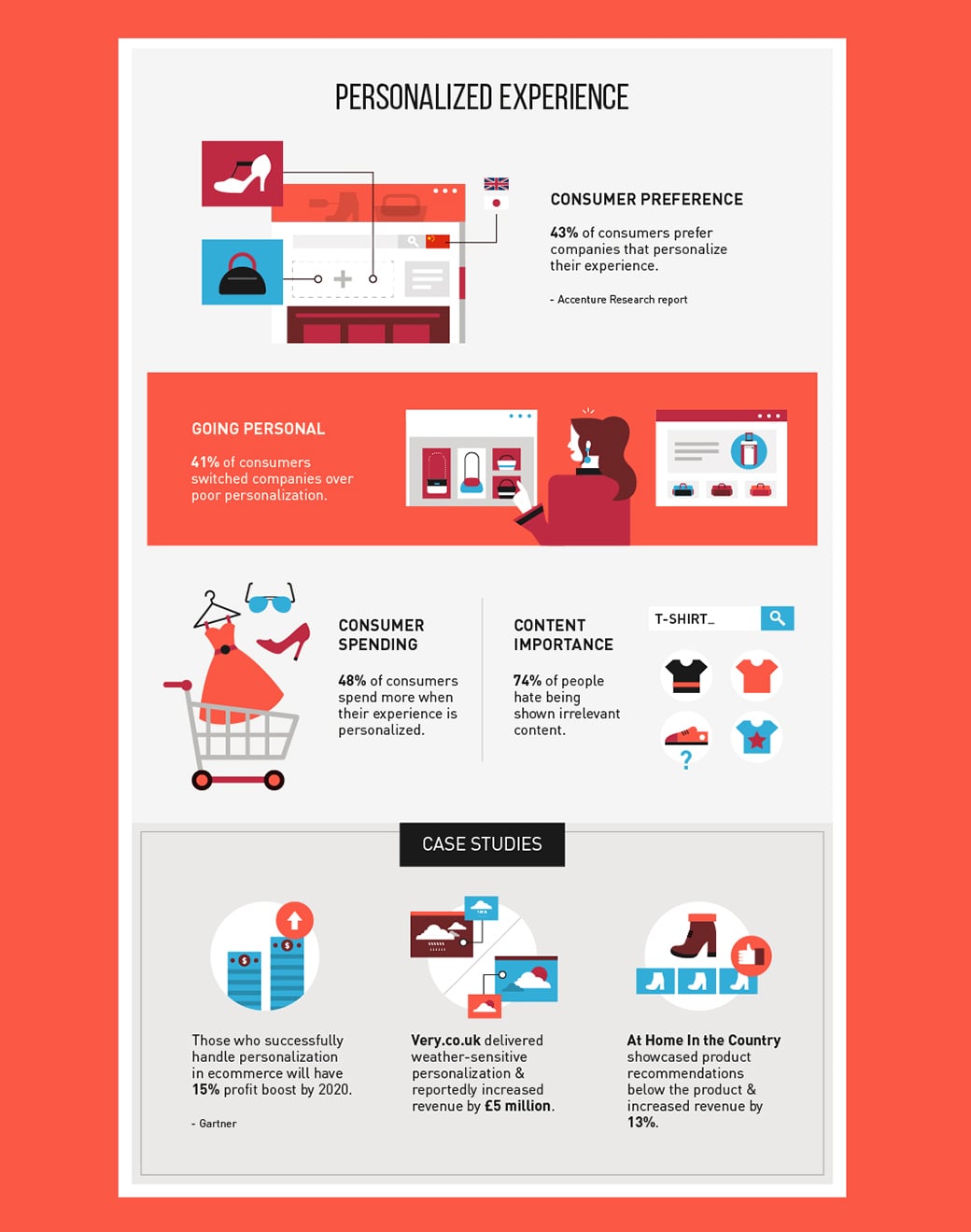 It affects sales, too. Around 48% of customers increased spending when the experience was personalized. And as always, content matters, with nearly three in every four people show their displeasure with irrelevant content. According to a Gartner study, firms that handle personalization successfully will see their profit boosted by 15% by 2020.


Hello Bot! The Future Is Automated

The projected figures are staggering. Around 85% of the total customer interactions by 2020 won’t include any human involvement. By the same year, one-fourth of all customer support and services will get integrated with virtual help.

In 2018, AI has already handled 45% of customer questions from the live chat on its own.

Speed is critical  – 69% of online shoppers linked their positive customer service experience to a speedy resolution of their problem. To give an example, NinjaTrader uses HelpSpot to provide quick and accurate support to more than 40,000 brokers and sales partners and has answered more than one million tickets. 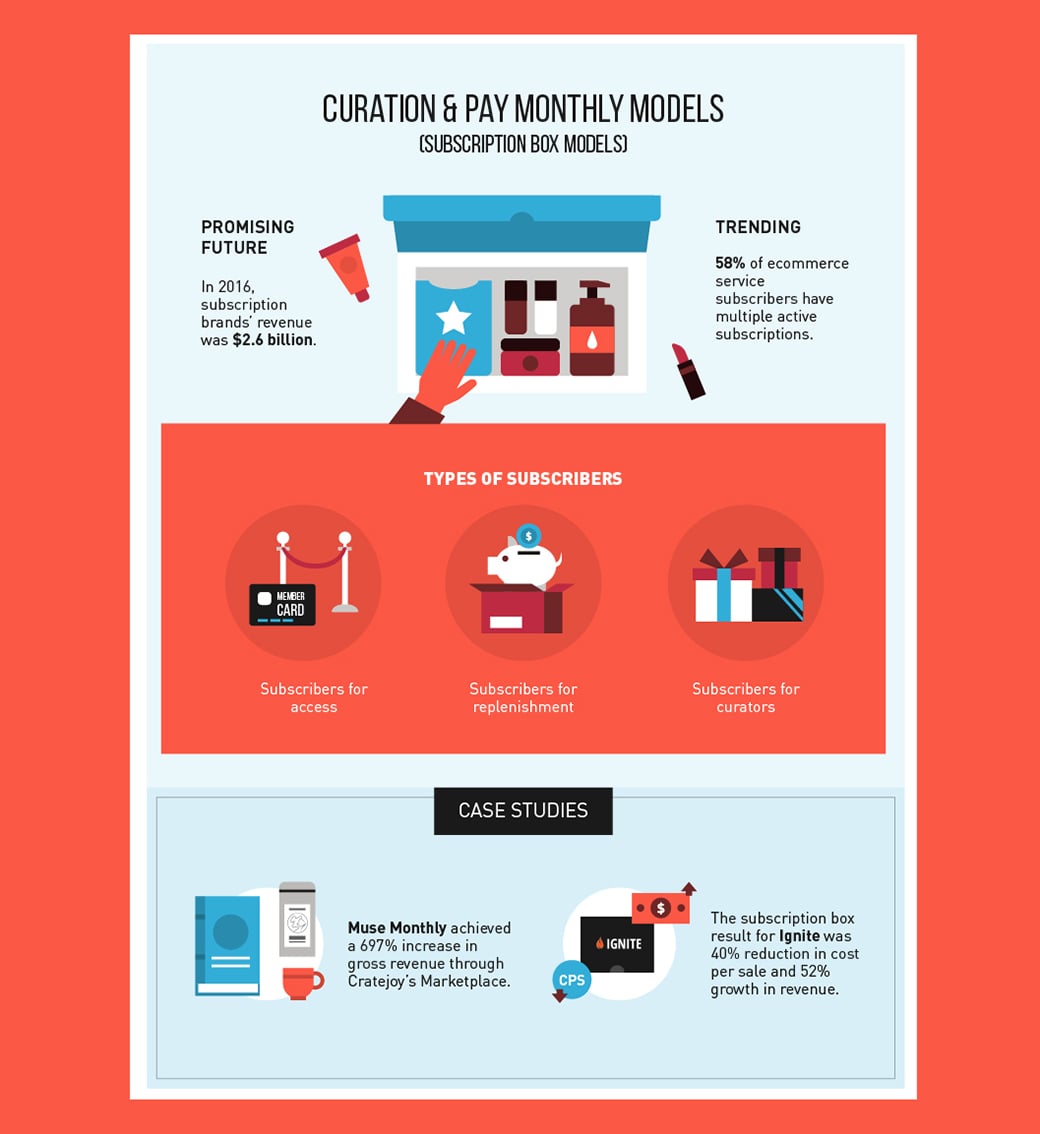 The worldwide chatbot market has achieved a very impressive 24.3% of Compound Annual Growth Rate (CAGR). Besides providing businesses the advantages of speed and scale, chatbots can be used by ecommerce retailers to pitch personalized content to customers, suggest deals, discount, and coupon options, and obtain valuable insights from customers. In the next five years, smart bots will take the customer-AI conversation and the future of ecommerce to the next level.

More than 80% of people prefer to use smartphones for locating stores, comparing prices, and searching for products. The share of shopping through smartphones and tablets will increase to 69% by 2020. 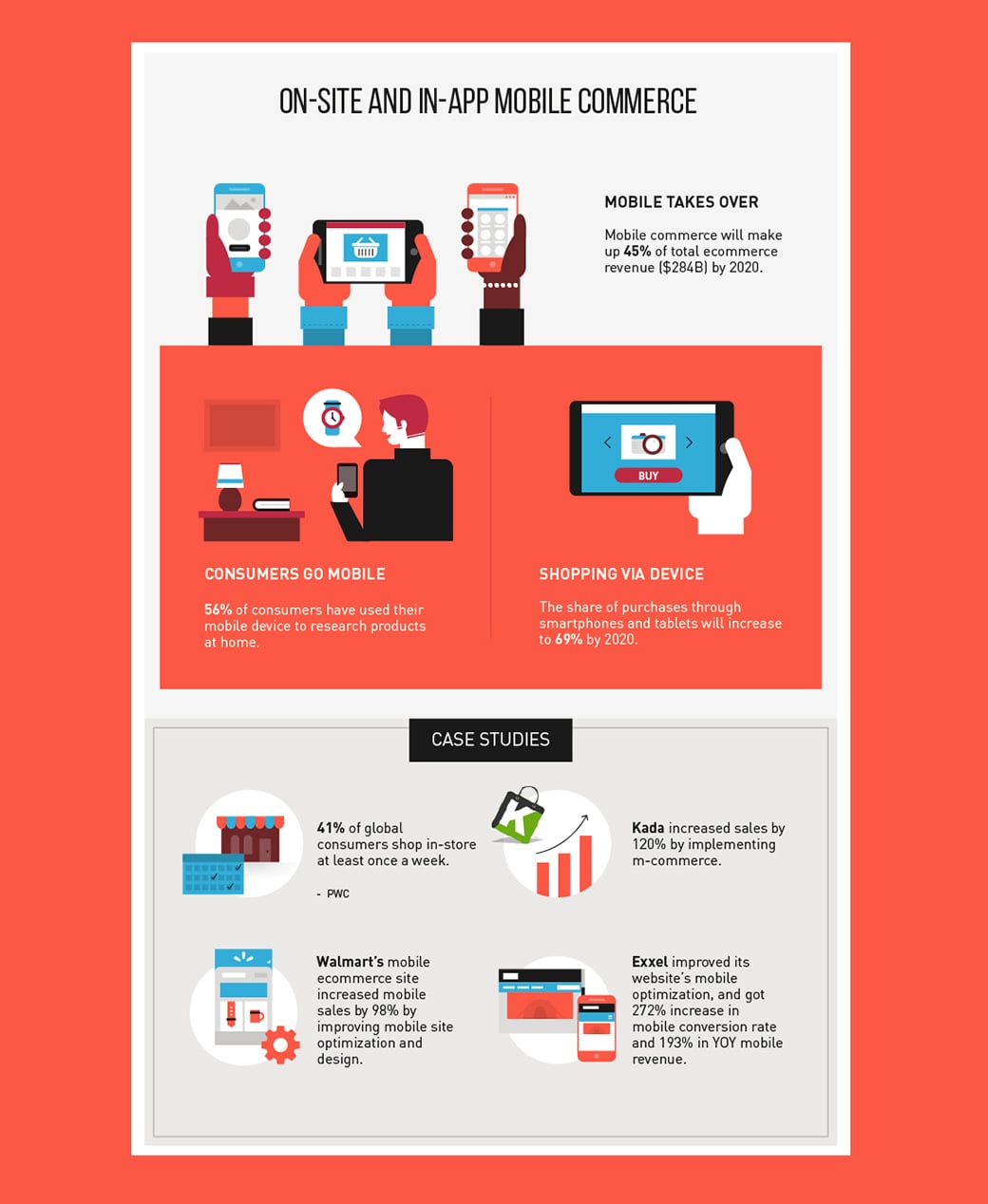 Facial recognition and fingerprint tech are the future of ecommerce – and will further simplify mobile payments and encourage customers to move from desktop to mobile devices. According to estimates, mobile will comprise 70% of ecommerce traffic by the end of 2018, and make up 45% of the total ecommerce revenue by 2020.

“Native advertising” or “native content” refers to content or messages that engage their audiences instead of disrupting the user experience. Native content does this by seamlessly fitting within its surrounding environment. 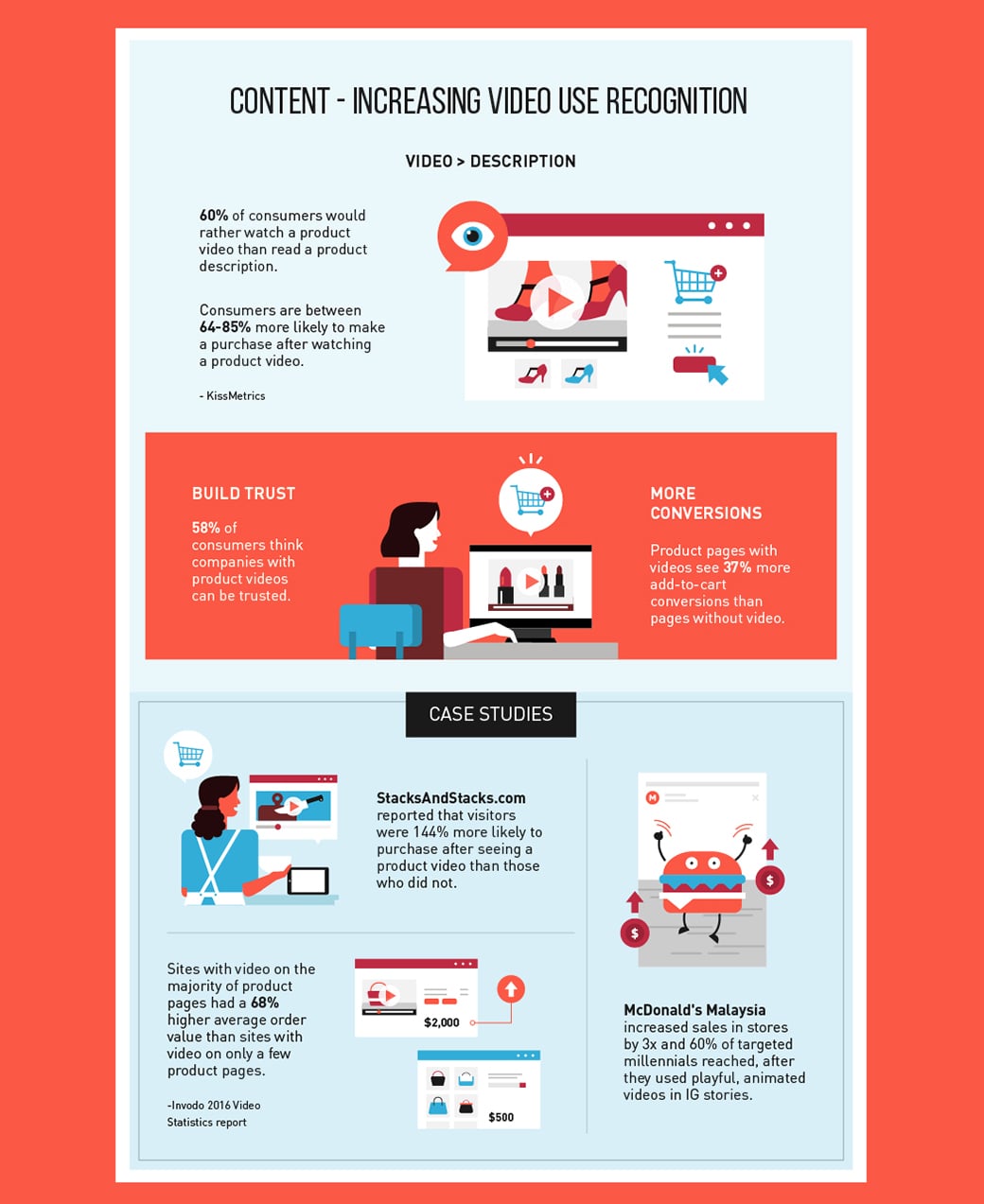 Examples of native ads include sponsored social media posts and promoted search results. So native Twitter ads and native search engine ads are part of the branded content. A good native Twitter ad, for instance, looks like any other normal tweet, with the only addition being text that says “promoted.” When it comes to the future of ecommerce, native ads are the way to go.

Most firms offer a multi-channel user experience, making use of a website together with social media channels, such as Facebook and Twitter, to interact and engage with consumers. However, there is a lack of seamlessness between these various engagements. This is where an omnichannel strategy comes into the picture, offering a holistic approach that ensures that the user experience is similar across different shopping channels. 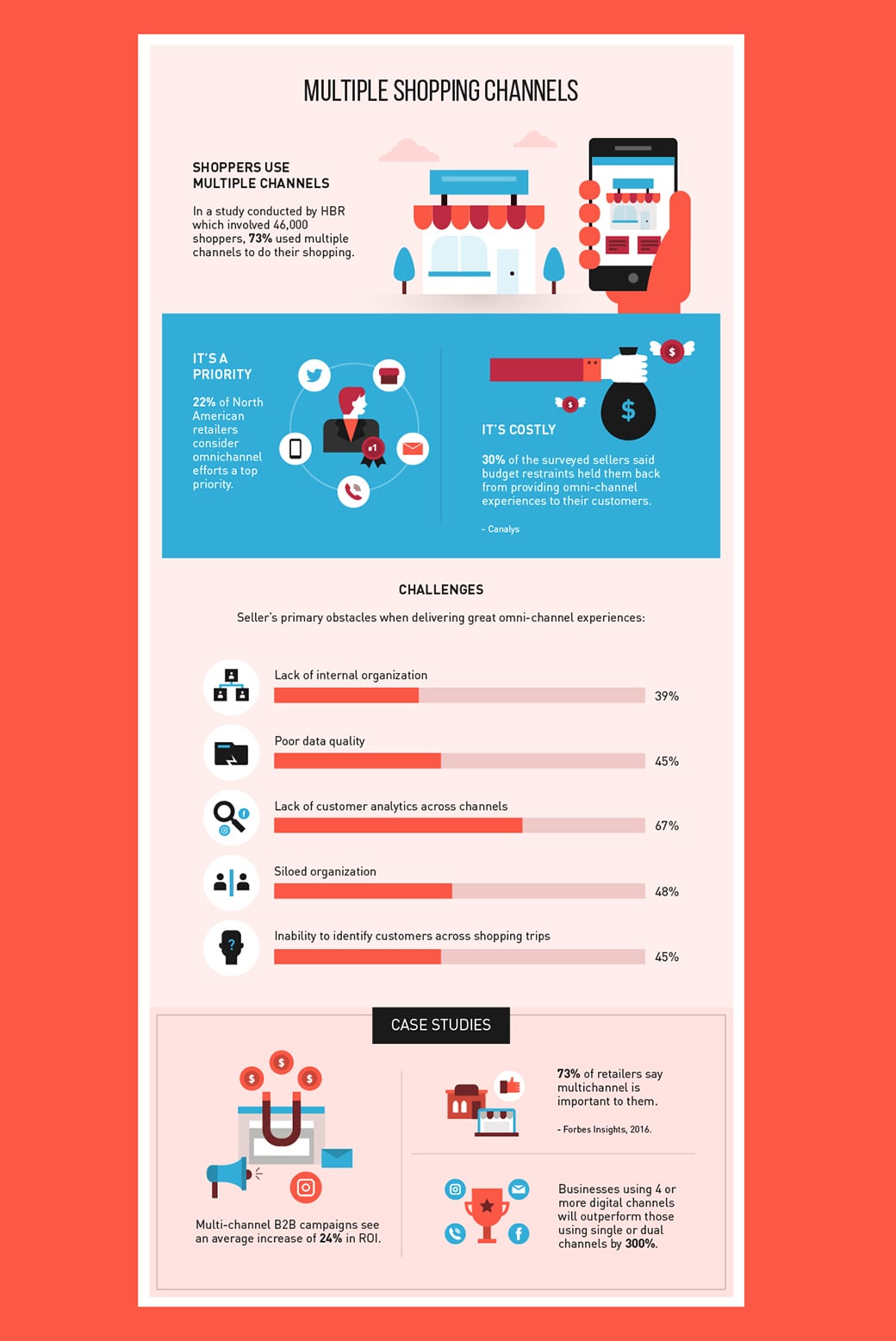 However, implementing a robust omnichannel strategy has proved to be a significant challenge for most companies. Lack of useful data, customer analytics across channels, and internal organization are some of the reasons why some firms have not been able to deliver great omnichannel experiences for customers.


Drones And The Future Of Delivery

Around 80% of the US customers expressed enthusiasm about the prospect of one-hour drone deliveries, and 72% of shoppers said they would spend and shop more if same day delivery were available. 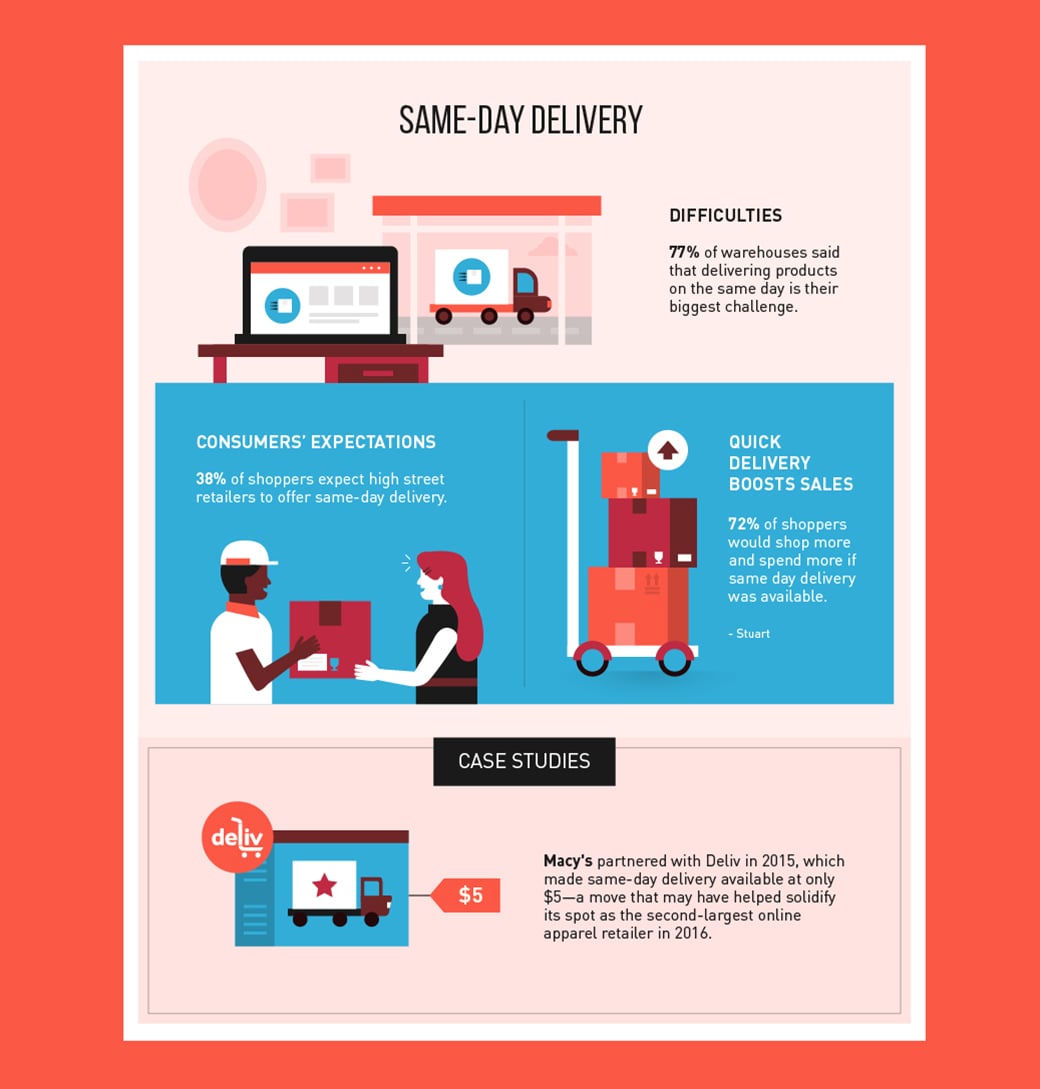 Drones will soon make this a reality in many places making them a valuable part of the ecommerce future. Around 40% of parcels will be delivered by drones within two hours by 2028. This is an exciting space to watch out for and full of quirky surprises. Uber Eats could soon be powered by drones, as the ride-sharing company announced in August 2018, and your dinner could be delivered from the sky.

If a patent filed by IBM is to be believed, futuristic ‘coffee delivery drones’ will assess if an individual is tired enough for a caffeine shot after evaluating biometrical data including pupil dilation and facial expression!


The Role Of Augmented And Virtual Reality

Thanks to initiatives such as Google Cardboard, AR and VR devices are becoming cheaper. According to ecommerce experts, retailers could start experimenting with innovative AR/VR strategies that go beyond in-store experiences and take AR/VR to areas such as packaging, with QR codes delivering enhanced product experiences. In the approaching future of ecommerce, imagine a world where you could start testing how the sofa looks in your room before actually buying it.

In the fashion and cosmetics retail space, new apps allow customers to preview how certain shades of lipstick or a particular jacket would look on them. NARS Cosmetics uses Facebook’s 360 Video to provide customers with 3D interactive makeup tutorials.

The High Stakes Battle Against Fraud

Retail firms lose billions of dollars to fraud every year. The need for protection against fraud for both online merchants and customers has never been greater to secure the future of ecommerce transactions. Enhanced online security will become an even higher priority in the next five years, with specialized platforms and services in the offing to provide ecommerce solutions against fraud.

The 2017 Online Fraud Benchmark report shows that 58% of retailers consider address verification services to be among the most potent tools to prevent fraud. Device fingerprinting and card verification numbers were also found quite useful. The bouquet of services and technologies that will be developed to fight online fraud will increase in step with the growth of b2b ecommerce.


Alexa, Where Is Ecommerce Heading?

With voice-activated assistants and devices such as Google Home and Amazon Echo getting increasingly popular, voice search will soon be the preferred search method, especially for younger customers. So, your business needs to be optimized for voice search. Walmart customers can already order merchandise by voice using Google Express. Other big chains such as Target, Kohl’s, Staples, and Costco are following suit.

The other thing to keep in mind about voice search concerning the future of ecommerce is that it is three times more likely to be local, making it essential to keep updating your business listing on Google so that the right information reaches local customers.

Multiple researches shows that consumers who use their Echo for purchases are among the most loyal customers of Amazon.

This might sound counterintuitive, but the not-so-new phenomenon of ROPO (Research Online, Purchase Offline) is here to stay. It could even get bigger. Ever since ecommerce came into its own, people have been researching products online and then making purchases offline. For customers, it’s empowering to scan through a range of options and choose the one that is an excellent value for money.

For retailers, ROPO offers insightful data into offline conversion. A study by Absolunet, an eCommerce agency based in Montreal, showed that 82% of consumers use mobile devices for researching local businesses, with 18% of local searches leading to a sale within 24 hours.

Ecommerce future trends indicate that retailers can use multiple methods and metrics, including consumer shopping history and geolocation tracking, to build profiles of shoppers. The future of ecommerce is genuinely open to a fascinating array of possibilities.

Tags: ecommerce ecommerce design mobile eCommerce website online shop design
Author: Karthik Reddy
Karthik Reddy, Community Manager at Subscriptionly.net, is the author of India’s Number 1 travel blog. Boasting an MBA in computer science, he once decided to get away from the office desk life and take a breathtaking journey around the world. He is eager to use the power of the global network to inspire others. A passionate traveler and photography enthusiast, he aspires to share his experiences and help people see the world through his lens.
Thank you for subscribing to MotoCMS blog!
This email is already in use.
Something went wrong. We are fixing this. Try a bit later. 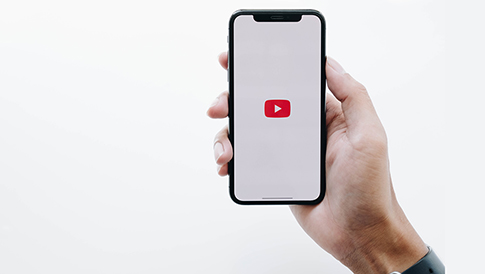 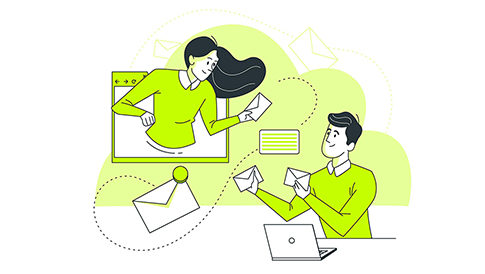 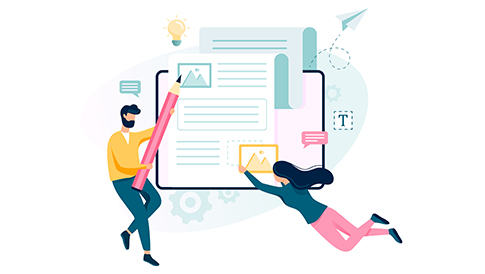 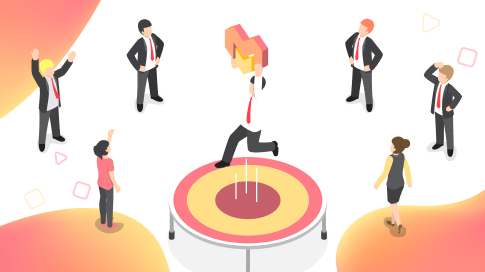